A system for plumbing requires a silicone joint to ensure that water does not enter into a pipe that another pipe moves in. The part was supplied with the system but is no longer available. The parts are replaced frequently due to wear and tear as well as mould growing from the wet environment. 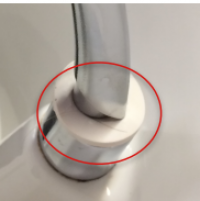 I have a 3D printer so it was sure I would use this in the solution. I considered printing the part directly from ninjaflex filament but I do not have the experience needed and was not sure that with the repetitive strain of the working environment the bonding between layers would hold up.

Knowing the part was originally injection molded, I decided to go with this idea and create an injection system. I requested information from a colleague concerning silicone and he suggested a 2 part silicone. From the catalogue I selected a silicone with a low Shore number to ensure maximum flexibility, for demolding and for the use.

I used a micrometer to measure the part in situ, as well as the parts that interfaced to it. I took more measurements than needed to ensure correctness.

For a first test I modelled the part itself in 3D, and printed this a 0.2mm layer height. On trying this in the place needed it was seen that the dimensions were correct and I could move on to the mold. 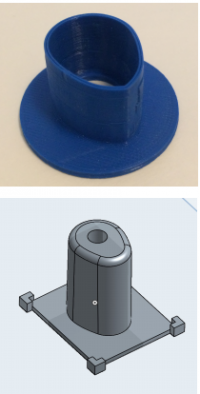 I had two considerations for the design of the mold, the easy removal of the silicone part, and expulsion of air bubbles.

For the easy removal, I needed to have a main part, and two parts that pulled out either side. I made the separations at edges of the silicone part for easy flash removal.

To enable the expulsion of bubbles, I decided on the ideal orientation of the mold during the process, put the injection hole towards the base, and included expulsion holes towards the top of the mold. These were just triangular extrusions cut out of the main part.

I intended to print the bolts to hold the mold together, but for rapidity decided to use metal nuts and bolts in the end. This s was wise as the clamping force needed is high.

Using a parametric CAD system (onshape.com) allowed me to add the draft angle after the design was finished by adding draft (3%) to the relevant extrusions.

I printed the mold in PLA, with a layer height of 0.1mm. As the first layer had a width of 150% for adhesion, I added a chamfer at the base of all vertical walls to compensate and give a smooth line. No support was needed. I used an infill of 20% as the parts did not need to be strong.

As I was concerned about the silicone sticking, I sanded down all internal surfaces and cleaned them to remove debris.

Be careful with the silicone mixtures. Always wear gloves and if needed safety goggles

I estimated the amount needed for the first attempt by calculating the volume of the part and doubling it.

The silicone has to be mixed in a precise ratio by weight, thus I put a plastic glass on a precision scale to pour the main part directly from its pot. The smaller amount for the second fluid was more precise with a syringe.

Once mixed, I sucked up the mixture into a syringe and then injected it through the hole. The mixture came out of the bubble openings as planned.

The silicone chosen had a short curing time, but I left the first attempt 10 times longer to be sure. See video here for an explanation: http://youtu.be/ZnjqA7JnAnI

I printed the mold in PLA, with a layer height of 0.1mm. As the first layer had a width of 150% for adhesion, I added a chamfer at the base

The silicone went everywhere, and the first step is always a couple of minutes of cleaning up. To open the mold it was necessary to clean the silicone off of the screw threads, then to prise the top open. It was then necessary to push the central part out, which was not easy. When I broke one mold I realised that due to the elasticity of the silicone it was in fact possible to just pull the part without disassembling the 2 parts of the body, a much easier process.

Initially I used a release spray but after a while I realised this was not needed. The silicone part needs to be cleaned to remove the flash that comes out from the joints with scissors, and the excess silicone from the hole where the silicone is injected with a knife.

The improvements to this, to reduce time per part, could be: