This is a simple shield for the PTL-ino / Arduino Uno.

This is my first PCB design which was created using Fritzing. It is intended as a simple shield that can be milled by the Cyclone PCB factory V2 in the lab.

(1) Copper fills are nasty when it comes to milling. The reason is that the tool that converts the gerber to drill paths can increase the width of the traces if there is space, which makes milling more easy.

This is single layer PCB with ground fill. In this design, the componants and pin headers are on the back side.

This means the Arduino must be placed with the back facing toward you in order to see the leds. 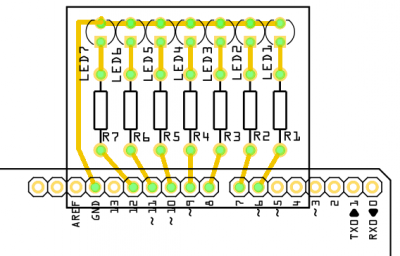 Version on a prototyping board done before PCB design. In this version, resistance are on the back of the PCB and led in front. 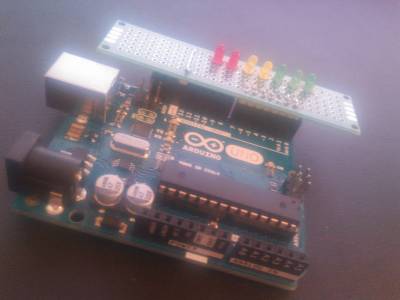 I intend to mill the PCB using the Cyclone PCB factory V2 in the lab. I will counting on Magnus help.

We're aiming to make it easy to mill (simple) PCB in the lab. This will involve documenting the process…

You can use sample led code from Arduino IDE.

* All that is needed is to set pin 6-12 to output. * When the output is set to high, the led will turn on and vice versa.