A USB AVR programmer made from discrete components.

Ok, so, you may argue that there are already (too) many ways to program AVRs. If you have a serial or parallel port, many very simple solutions exit. But as soon as you are stuck with USB, you needs some extra logic, typically either some kind of USB to GPIO chip/cable or another uC. If you don't like the former (many need closed-source drivers), you can use an AVR-based programmer. Yes, Arduinos can be used to program arduinos.

Hey, but that's a chicken-egg problem: how to program the first programmer? - This project aims at providing a solution.

The programmer is built using (optional in parenthesis):

To test the stuff:

Reading the USB specs, I came across the port test modes. They would make perfect GPIOs for computers with only USB ports. Unfortunately, these modes only work in high-speed mode, where signal levels are somewhat small (reaching only 800mV without termination). I would need to build a small level shifter. A USB device made from discrete electronics, that just has to be done!

Also, D+ and D- cannot be driven independently, but only three combinations are possible J, K, SE0_NAK, where either one line is high or none, respectively (i.e. never both lines are high). Now, the AVR samples the data line on the rising edge of the clock. To send a one, the normal operation would be:

… which would ask for all four combinations.

Well, luckily this situation can also be achieved with the available three states by delaying the data line.

Unfortunately, the story is not yet over… after bread-bording a bit with a simple npn-inverter circuit, the following issue caught me: the arduino is power hungry on SCK (arduino pin 13), where it has an LED connected. The level shifter needs a bit more driving strength…

Three issues need to be fixed:

This circuit (put in LTspice) would do: 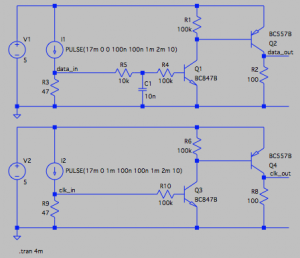 This is the result, with a close-up on the CLK rising edge: 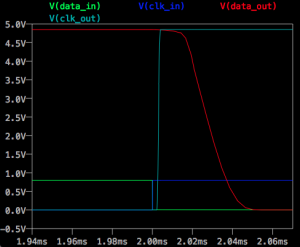 A PCB is not really necessary, but with KiCad it's quite quickly designed (single-sided) and sent to for production to OSH Park (as double-sided, with empty top layer…)

The PCBs are back. Time to solder! 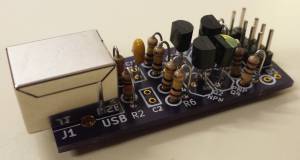 That's an X-mas hack! – finally a quite minute to connect up everything (the ISP pins are also available on the I/O pin headers of the arduino, a perfect place to hook up a logic analyser): 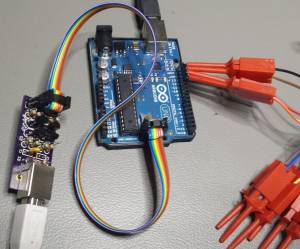 … it DOES! Merry Christmas! (and more to come next year)

avrdude hacking! – reading does of course not work, but here just an example command:

… and the corresponding screenshot from the state analyser:

This is some micro bootloader that may be used to install a real bootloader. I do not know if it is really working, but keep it here for reference. 26 bytes and no warranties!

With an ardiuno uno this python snipplet was used as a proof of principle for the communication “protocol”: